I'm back from , part fun and part sadness, as we left our youngest over there to attend the at Manoa. Go Warriors!!

Part of me is still on time and part of me is focused on a wedding this weekend; Kenton's Fellowship Camp next weekend and a trip to at the end of the month for the same wedding celebration. Yet the rest of the world won't hold still so here's where my thinking has been lately.

First off if you haven't read what has been going on with Kirk of the Hills in you need to check out Tom's Blog http://tomgrayofthekirk.blogspot.com/2006/08/meeting.html . This is the one from Thursday so to get the whole story you'll have to read a few before as well. Their discussion with Eastern Oklahoma Presbytery is far from over I am certain but nonetheless they took a major step with their move to disaffiliate themselves with the PCUSA.

My take on this is that I am sorry that the Kirk left. We've lost a great witness to the gospel within our denomination. But I can understand why they left. I do not know Tom personally but I am sure that their leaving was in no way meant to be a slap at those who remained. It was the difficult way that they believe God was leading them to take. For that I can only give thanks to God.

It would have been easier for Tom to just go on being a "big steeple church" and ignore Presbytery. They could have designated their money, started an outside foundation separate from the denomination and been a law unto themselves. Yes, Hollywood Presbyterian and the fantastic[1] actions of the Presbytery would be in the background but they would be pretty much on their own. They would keep growing mostly because they would be disaffiliated from the denomination even though they were still "part of it".

But is easier what God expect of us?
If easier was better Jesus wouldn't have been:
conceived of the Holy Spirit,
born of the Virgin Mary,
suffered under Pontius Pilate,
was crucified, died, and was buried.[2]

If easier was better Calvin would have been a Roman Catholic Priest.

So Kenton will start asking itself if God is leading them down an easy pathway or a difficult pathway. I and the two elders who attended New Wineskins want our Session and perhaps our congregation to see the DVD of Dr. Robert Gagnon's talk and Rev. Carmen Flower sermon. I hope that they heard the truth about what she said about how New Wineskins would be meeting even in the PUP report hadn't passed. That's not an exact quote but its pretty close.

We will spend some time in the exciting world of property and corporation law as we look at the "Articles of Incorporation" and our by-laws. We will consider where they do and don't mesh and what needs to be changed to reflect a better way of doing ministry in 2006. We'll also do the other business like membership, reports and the rest.

It hit me on vacation. As I left my devotional guide on Hawaiian Airlines (sorry Ken) I started doing some of my own refection and meditation on God's word and the years of serving Christ. I decided I was more content in the early days of the Jesus Movement in and than in the world of the denomination. I was Presbyterian but I was in a evangelical and Jesus loving church not a denominationally stale one.

I reflected how the times I felt revived at Presbyterian gatherings was at the Evangelical pastor's conference at Mo-Kan and a Presbyterian evangelism conference in . I remember excitement at being a commissioner to GA in and of serving as a Hunger Action Enabler for Nevada Presbytery. But those were a different sort of excitement. They resurrected my political science background and weren't all that spiritually fulfilling in the long run.

Then it dawned on me that perhaps I understood why Tom and others will take the congregations they serve down the difficult journey. Maybe they, like me, want to be part of a denomination and Presbytery where God's word and not political correctness[3] is the final authority. Perhaps they want a place where you aren't viewed as a theological throw-back, hick, or heretic if you pray in the name of the "Father". Or where you can talk about what Jesus means to you and not be looked at as if you'd passed gas in a concert and a place where one can talk about loving Jesus and be understood and appreciated.

So we will keep on keeping on. We will serve Jesus and follow where we believe He is leading us. We will remain true to Christ's Word, as revealed in the books of the Old and New Testament (not some sort of warm-fuzzy feelings of what we'd like to think is true) and let the chips fall where they may.

[3] I'm not talking about being considerate but the overboard "pc" stuff that is present in most Presbyterian meetings.

Smoking #2 Are you kidding me?

Oh my goodness…. Do you know what brought down President Nixon? It was his failure to admit that he had interfered with the investigation. Do you know what made President Clinton a joke? It was the fact that everyone one knew he was lying and he just wouldn't own up to it. Now we have Davis Perkins explanation as to why the Presbyterian Publishing Corporation trying to explain publishing Griffen's book by saying, "the arguments supporting those claims merit careful consideration by serious-minded Christians and Americans concerned with truth and the meaning of their faith."

Did Perkins even read the "Venus Project" website in which Griffen explains where he got his interesting view of 9/11? And so more than 1/3rd of Americans polled believed that "federal officials assisted in the 9/11 terrorist attacks or took no action to stop them" that out of 1,010 people polled. I imagine a third of the people believe we never landed on the moon; that Area 51 hid aliens; that the National Enquirer is a legitimate news source; and that WWF is actually real. It doesn't mean that they are right. It just means that a third of them don't quite get it.

It seems after reading Griffen's own statements as to how he became convinced of the governments involvement that he is at best an example of what it means to allow free speech in the US and at worse someone who probably wears tin-foil hats to keep the NRO from reading his mind at night.

If the PPC would just admit that it was a dumb decision and take the hit they'd find a lot more people respecting them the next time they want to publish something of laughable theology.

FIle under "What are they smoking?" 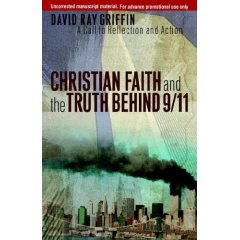 Not having written for a while I was intrigued with a couple of items which passed through the web pipeline and across my desk. The first is Presbyterian Publishing Corporation. Push the "About us" button and you'll read the following: Building on the Reformed tradition, the Presbyterian Publishing Corporation seeks to glorify God by contributing to the spiritual and intellectual vitality of Christ's church. To that end, PPC publishes resources that advance religious scholarship, stimulate conversation about moral values, and inspire faithful living."

I would suggest they amend it to read "Ignoring our Reformed tradition, the Presbyterian Publishing Corporation seeks to undermine the spiritual and intellectual vitality of Christ's church. To that end, PPC publishes resources that advance speculative (at best) religious scholarship, push aside traditional moral values, and seek to derail any sense of faithfulness in following Jesus." Need an example? Just check out the new book which they will publish "Christian Faith and the Truth Behind 9/11: A Call to Reflection and Action" by David Ray Griffen. Is it any wonder why our denomination is in crisis?

The second was a note from a site called beyonmarriage.org which is scary simply because the people who are signatories to their agenda actually believe this c%$p. I am afraid the Washington office of our beloved church will get hold of this and seek to add our denomination's voice to the abomination presented in their agenda.

Is that too harsh? Not at all, at least it isn't a whip declaring God's house to be a house of prayer and not sexual immorality (bet I hear about that last comment).