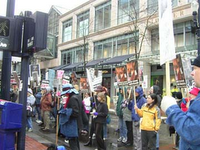 You gotta love . It's a town of such contrasts and inconsistencies it makes you smile; just before you puke. Check out the news over Schumacher Furs & Outerwear's leaving downtown . Their reason is the continual protest [see photo] against their product. The owner is quoted as saying, "Our clientele wants us to move. They do not feel safe coming to our store or to downtown," he says. "I do not feel safe coming in my own store."

Now maybe it is just my strange way of looking at things but I wonder if I'd see the same sort of protests on NW Lovejoy would be tolerated by the great open-minded, free-thinking people of . A decade ago, when protestors stood outside the Abortion Clinic with enlarged photos of aborted children they were shooed back by the courts. In downtown would be customers have to force their way through screaming activists.

Those who protest the death of innocents are labeled as terrorists. Consider this quote by Matt Rossell on the allegation that he was part of a terrorist group. "We're law abiding citizens,…In this day and age we know what terrorism is and clearly we are exercising our first amendment rights."

The sad thing is that he's talking about his right to protest the death of animals not humans. Years ago Randy Stonehill wrote a great song that seems to become more poignant with each passing year. In Stop the World he writes, "It's okay to murder babies but we really ought to save the whales."

I don't care what your stand on abortion is. Personally I don't put myself into either the pro-life or pro-choice camp. Both have way too much baggage for my comfort.

What I am intrigued with is how what we consider "valuable" and "worth saving" has somehow gotten skewed. I can't help but wonder if this isn't just one more example of the slide into depravity pictured in .