The Dream: a process of fulfillment... 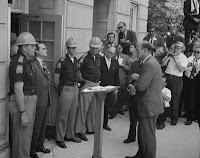 I just finished watching CNN's broadcast of Rev. Dr. Martin Luther King Jr's "I Have a Dream Speech". Listening to the entire speech several things struck me. First of all how much I appreciate the African-American style of preaching. Dr. King didn't give a speech he preached a sermon. Secondly, I was struck how much of a prophet Dr. King was. He spoke of the "manacles of segregation and the chains of discrimination" which were/are a reality for the African-American.

Undoubtedly on his mind was one Gov. George Wallace of Alabama who declared in his inaugural speech in January of 1963, "In the name of the greatest people that have ever trod this earth, I draw the line in the dust and toss the gauntlet before the feet of tyranny, and I say segregation now, segregation tomorrow, segregation forever." The photo of Gov. Wallace blocking the entrance to the school is an enduring reminder of the division that existed [and still exists to some extent] in our nation.

A 1995 Washington Post article recounts how the suffering of Gov. Wallace, following his assignation attempt had opened the door for change. Stephen Lesher tells of a surprise visit to Dexter Avenue Baptist Church in 1979. This had been Martin Luther King's congregation in the 50's. Wallace reportedly said, "I have learned what suffering means. In a way that was impossible {before the shooting}, I think I can understand something of the pain black people have come to endure. I know I contributed to that pain, and I can only ask your forgiveness." In 1995 he met with some 200 veterans of the Selma to Montgomery march and told them, "Much has transpired since those days. A great deal has been lost and a great deal gained, and here we are. My message to you today is, welcome to Montgomery. May your message be heard? May your lessons never be forgotten." And as reported by the Washington Post reports he held hands with black southerners and sang "We Shall Overcome."

I have no delusion about President Obama's inauguration ending inequality for African-Americans, Latinos, Christians or any other group. That is a part of our fallen nature that will be overcome totally only when Christ Kingdom comes in its fullness. There will still be unneeded traffic stops in our fair city, hate crimes and stupid people who are allowed to voice their hatred and cast a ballot.

What I do have is a sense of God's presence in all that has happened and will happen. I believe, and will pray for a community and nation in which justice and mercy, strength and steadfastness is forged in the lives of people throughout our nation without regard to looks and language.