South Park and "Islam is Peace" 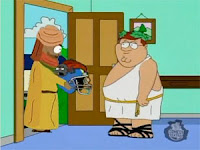 After last week's Cartoon Network cave-in to Islamic hate mongers the way is open for followers of Jesus to also demand their time of censure. Perhaps Jon Stewart's spin is right; it was done to protect the creators. However even among the Muslim community there are those who called this a "distraction".

Perhaps vague threats against shows that take pot shots at Jesus, make fun of Christians, use the name of God in vain or which promote witchcraft and the third-date rule. But alas that won't happen because in spite of the aberrations among those who call themselves Christians; Christianity is REALLY a religion of peace and love.

Aberrations like white supremacists wand those who bomb abortion clinics and murder in the name of God are the exception not the rule. Followers of Jesus do not crash planes into Mecca on Hajj. Presbyterians don't plant car bombs outside of Baptist Churches on Sunday mornings. Lutherans don't gather in mobs and beat Catholics or Pentecostals on their way to worship and burn down churches. We leave that to others.

No, Christ followers take abuse because our Lord was abused. We believe it when we're told we will face persecution because Jesus was persecuted. Christ followers believe in turning the other cheek, going a second mile, and repaying evil with love.

Need examples? Here's a large church in Portland that will hold abbreviated worship services this Sunday, May 2, in order to send their members out into the community to serve others. Countless other everyday folks reach out each week to those in homeless shelters to the hungry and to children in less than ideal situations.

Millions worship in small congregations, old buildings, and with a dozen different styles. Millions give sacrificially to support others in doing what they cannot--from bringing aid to Haiti [no we haven't forgotten] and to adopting children around our world. And ALL of this is for the sake of Jesus.

So go ahead networks produce your junk. Go ahead talking heads and spout your attacks against God's people. You don't fear censorship because of our threats. We won't kill, maim or attack your homes, businesses and the like. Instead we'll do the worse possible thing we could do. We'll pray for you.