Well the GAC finally came out with a paper to answer the concerns of the New Wineskins and it isn't too much of a surprise. Take the time to read it but understand that they find nothing wrong with what's happened in the PCUSA. Of course they do throw those of us who don't agree a bone when they write, "...that there is always a gap between any denomination’s official positions and the views and practices of some ministers and members of that denomination."

Anyone who has read the statements of faith that come from those being received in our Presbyteries probably have realized this fact. I will say that they are quick in responding to comments. I emailed the link at the bottom of the PDF and got a response back in very short order.

Read it, respond to it and I'm sure they'll be more on this in the days to come.
Peace.

Dilbert is a Presby… 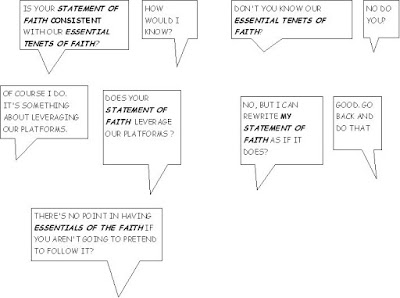 So, one of my favorite cartoons is Dilbert and today's (Sunday the 10th) struck me as particularly Presbyterian. Because of copyright concerns I've not pasted the cartoon here but instead have pasted NEW balloons which you may cut out and use to see the denominational aspect of the carton. Have a good week all.

It's on the table…

The Presbytery of the Cascades has officially presented it's process for congregation's considering leaving the PCUSA. I received mine in my presbytery packet today. After making sure there were no major revisions from what I'd already received I post it for the enlightenment, edification and whatever else you may glean from it.

(sorry for any formatting glitches)

The mission of the Presbytery of the Cascades is to serve God by nurturing, supporting, and celebrating our common ministries. Even in times of conflict, we seek to uphold one another, respecting each other’s integrity as we perceive the Biblical basis and Christian credibility of varied perspectives. It is the Presbytery’s desire to encourage peace and unity while minimizing confrontation between and among its congregations and members as we seek together to find and represent the will of Christ. In all that we do, it is our prayer that they will know we are Christians by our love.

With believers in every time and place, we rejoice that nothing in life or in death can separate us from the love of God in Christ Jesus our Lord.

When the leadership of the Presbytery becomes aware, either through formal congregational action or through informal contacts with church leaders or members, that a congregation is in serious disagreement with the denomination, visitation will be offered to the congregation of a Conversation Team by the appropriate Committee on Ministry.

The purpose of the Conversation Team will be as follows:

1.To engage either the leaders of the congregation or the congregation as a whole, as circumstances dictate, in a time of prayer and conversation aimed at understanding the conflict and identifying steps toward reconciliation.

2.If the team determines that progress can be made toward reconciliation through continued and constructive dialogue, the team will engage in such dialogue.

3.In its dialogue with the church, the team will share matters for consideration with respect to implications for a church considering leaving the PCUSA and implications for the impact on the status of the Presbyterian minister of such church.

If, after dialogue, unresolved issues and concerns remain, the Committee on Ministry will recommend that Presbytery Council create a Resolution Team to work with the church.

1. If the Conversation Team determines that its discourse with the church still leaves open issues and concerns, a Resolution Team established by Presbytery Council shall work with the church to achieve a mutually agreeable resolution.

2. Working in good faith toward a mutually agreeable resolution means that the Resolution Team as a representative of Presbytery and the congregation’s clergy and officers:

3. A mutually agreeable resolution may result in clarification or mediation of the church’s connectional relationship to the Presbytery within the limits of the Book of Order and other binding requirements existent throughout the PCUSA and the Presbytery.

Or the mutually agreeable resolution may result in a recommendation to Presbytery that the congregation be separated from the Presbytery, be divided, dissolved, or be transferred to another Reformed denomination within the framework of the applicable Presbyterian requirements with due regard for the rights of and obligations of all interested parties.

Such a resolution shall:

IF A PRESBYTERIAN CONGREGATION SHOULD CHOOSE TO LEAVE THE PCUSA

IF A PRESBYTERIAN MINISTER SHOULD CHOOSE TO LEAVE THE PCUSA