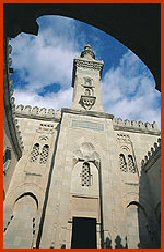 Here's a suggestion that would never fly, probably should never be tried, might get myself in hot water with an entire world religion but here goes.

What if the decided to replicate the religious freedom of it staunch ally in our War on Terrorism, ?

The first thing that would happen is that 1209 mosques would close their doors. Why, because those in who are not Muslims aren't allowed to have public places of worship. A report from the US Department of State in 2005 (the link to the site is below) says, "There exist no synagogues or churches in the country, and, while there have been no specific reports of physical violence against, or harassment of Jewish people, there have been numerous reports of violence against and harassment of Christians."* *From the same report, "The Government prohibited the public practice of non-Muslim religions. In general, non-Muslims are able to worship privately, but must exercise great discretion to avoid attracting attention". And, "There were cases in which the Government arrested and detained Christians, at times for holding services and at times apparently arbitrarily"*

Any fairness in the tort provision of law would also be changed. For example the Muslim family killed by a Christian drunk driver would only be eligible to receive 50% of what would usually be rewarded and if the wife, sister or other female was the plaintiff only 25% of that. This too from the report.

"According to the country's Hanbali interpretation of Shari'a, once fault is determined by a court, a Muslim male receives 100 percent of the amount of compensation determined, a male Jew or Christian received 50 percent, and all others (including Hindus) received 1/16 of the amount a male Muslim receives. Women receive 50 percent of what males receive in each of these categories."**

There would be no teaching of Islam in public schools and it wouldn't matter if the Saudi Royal Prince gave 20 million to Harvard and . What's more New York City Schools wouldn't be able to set aside a room for the Muslim students to pray during Ramadan[1] In fact, the courts in the would be able to hold suspect or to deny any Muslim witness or testimony in a court of law. "Under the Hanbali interpretation of Shari'a law, judges may discount the testimony of persons who are not practicing Muslims or who do not adhere to the correct doctrine."*

Not only would there not be teaching of Islam but there would be mandatory teaching of Christianity in all schools. Any Koran brought, published or found in the nation could be confiscated and there would be a group of "citizen vigilantes" whose job it would be to make sure the dominant Christian faith was being supported and adhered too, I believe they are called Mutawwa'in. Like , it would be illegal to wear a head scarf, or any outward indication of one's Islamic faith, just as it is illegal to wear a cross in the Kingdom.

So what am I getting at? In this day-and-age of seeking "level playing fields" in international markets doesn't it make sense to level the playing fields in other areas as well? NAFTA, the first Bush's proposal, is aimed at brining the , and together as tariffs are phased out over 14 years. There have been talks from both parties about the "dumping" of various parts, items and the like from , and others. Why haven't we considered a "social" leveling of the playing field? The powers that be would point to our "freedoms" but IMHO I want to suggest that we're much more interested in maintaining our importation of Saudi oil than we are in standing up for human rights or supporting our own beliefs.

No! The is not, never really has been and never will be a "Christian nation" nor should it. I that were the intention of the followers of Jesus Christ we would be rioting and burning over depictions of Jesus in the East End of London.[2] We accept that our Lord will be humiliated today, even as he was during his mockery of a trial and on the cross. For we believe that Jesus "emptied himself" [] and took on a form of a human.

[1] http://www.becketfund.org/index.php/article/179.html accessed The Becket Fund served as a support of NYC's schools to allow a time of prayer. This was over an against an ACLU concern.

Did you ever wonder about..

The bible study tonight will start looking at Mark 2. It’s a three part passage with verses 1-12 being about a man who is brought to Jesus by four others guys and Jesus heals him after telling him he is forgiven.

The second section (vv. 13-17) deals with a tax-collector, sort of a Roman casual laborer, named Levi. He is called by Jesus to follow and he does. It seems from the story that not everyone is happy with that choice or with the fact that Jesus would even want to be around someone like that.

The third (vv. 1-28) continues the controversy which began in the first section. It builds on this uneasiness of Jesus, who ignored the “law” when it came to theology and the company he kept. Now it begins to move into the sphere of “decorum” and seemingly unflattering if not flaunting of God’s law.

I started off with the humor because we need to exercise a bit of caution when we start to pick a fight with the Jewish leaders who seemingly attack Jesus. I’m sure most of say, “I would never have done anything like that!” or “I’d never claimed Jesus was possessed!” Yet before we make such a statement perhaps we should look at those humorous misstatements that are part and parcel of our everyday life.

contradictions. We claim we’re free from Sin but we still sin. We say there is no racial, gender, or class difference in Jesus yet insists in worship in a style and language that is comfortable and fairly predictable. We may say one thing but the way we live shouts something else entirely.

A strong believer in a church who was more liberal [progressive is the new PC* term] than their pastor and after several years they felt they needed to be in a congregation that shared their values. Living in an ethnic part of their city with many friends who were people of color can you guess what they did? They joined the big “white” church in town where there were people of color, to be sure; but they were our type of “people of color”.

Don’t miss out on the healing Jesus brings by misdiagnosing your own state of wellness after all didn’t someone say, “Healthy people don’t need a doctor, but sick people do.”**

It is now the fifth day of Christmas… you know “5 golden rings”…OK so they’re not gold but there on NBC, MSNBC and the internet are the Olympic rings in all their glory.  Now I’m more into the summer games than the winter. Phyllis has settled in for the next two weeks. She’ll root for her favorite skaters, gripe at the judges and just enjoy herself. She made a good attempt at downhill skiing and it wasn’t for her. She would still like to try the luge, better her than me.
I guess what I find interesting is how content she is as she watches it.  There’s no big production. There’s no big deal. She is simply happy with her show.

How come more of us aren’t that way when it comes to life in general? Is there something in our sinful make up that makes us desire more than we have. Is there something that keeps us from being content with the mercy and graces Christ has given us?

I don’t know about you all but I understand the difference between “joy” and “happiness”. (If you haven’t realized it yet they have very little to do with each other) But the idea of contentment is a growing edge for my life.

Well I guess I’ll wrap this up and go sit with my wife.